… But I still could not quite believe that the U.S. government would actually mount a military-style assault on a community with women and children. Everything American in me was stunned by the possibility that my own government might wipe us out. Where’s Paul Revere when we need him? I thought childishly. Where are the Minute Men who should stand by our side? … — David Thibodeau, Waco: A Survivor’s Story

Perhaps it has been my lifelong fascination with “last stands.” Little Bighorn, the Alamo, Rourke’s Drift, the 300 at Thermopylae … I don’t know. Or, maybe, it’s because of a natural curiosity of the diversity of religious faiths. Probably, a bit of both. Could simply be a root-for-the-underdog thing. Regardless, the story of the 51 day siege of a small religious community at Waco, Texas has recently caught my imagination.

It hasn’t always been that way.

I recall driving through Texas in 1994 and passing by Waco. “Whacko Waco,” I think I said. I have come to realize, that was hardly a unique thought. It was horrendous to watch the news clips the year before, but I figured the Branch Davidians were just a bunch of looney-tunes. Seems most everyone felt similarly. After all, the news presented it as a Jonestown-type mass suicide by a religious cult led by charismatic, but delusional, leader. Scenes of that self-induced massacre were actually shown on television along with the horrors happening live at the little “compound” known as Mount Carmel. David Koresh was their inspiration.

I don’t think I ever thought about it again. Maybe a time or two.

Then, marking the 25th anniversary of the initial shootout with the ATF, the Paramount Network began airing a series about the events called, simply, Waco. “After watching it [6 episodes] – and I am not sure how faithful it is to reality, though it is based on 2 books, one by an FBI agent another by a surviving Davidian [Thibodeau] – I may have changed my mind. It appears to be a fair & balanced presentation. I thought it was pretty close to excellent!” I wrote on Facebook on March 2.

After much reading, including David Thibodeau’s very forthright book, and watching numerous documentaries, I believe the series depicted events very much as they really happened – with allowances for time compression and some television trappings.

The siege at Waco began on February 28th, 1993 with a vicious gun fight and ended in a blazing fury on April 19th of the same year – perhaps, not so serendipitously, the same day – in 1775 – that the Minute Men of Lexington, Massachusetts stood up to the British army to begin the American Revolution.

Besides whether or not Koresh was divinely-inspired, there are two main points of contention regarding this sordid episode: who fired first on February 28, and who started the fire on April 19. I wish I knew, but I am convinced to my own satisfaction that the ATF fired first, and the FBI caused the fire. Fresh off the Ruby Ridge fiasco in Idaho, the ATF was in danger of being defunded. Here was an opportunity for redemption. With stories of children being molested and a reported storehouse of illegal weapons floating about, the ATF certainly approached the scene in an odd manner – helicopters & scores of heavily armed agents to serve a warrant for one man. One who could have easily been picked up away from Mount Carmel on numerous occasions. If the Davidians fired first, then … why …?

It should also be noted that Koresh’s polygamous relationships with underage wives aside, psychologists who examined the children who were released at various times during the early stages of the siege found no evidence of abuse and reported that these kids behaved in normal & expected ways. The group supported themselves by an assortment of means, including an offsite auto repair shop, carpentry, rock band, buying & selling legal firearms at gun shows … one Davidian, Wayne Martin, even had a small law office in town. In short, the group was legitimate in most every way.

After running out of ammo and calling a mutual cease fire, the ATF skulked away carting their four dead and 16, or so, wounded; to be replaced by the FBI’s Hostage Rescue Team & negotiating units. At odds, the two factions of on-site FBI bickered about tactics for the duration of the siege. The HRT employed sleep deprivation tactics – bright lights, blaring music [including Nancy Sinatra’s These Boots Were Made For Walking – a not-so-subtle taunt] & bizarre sounds all night long. Finally, the decision was made to “insert” tear gas into the building to force the occupants out.

As modified tanks drove over cars, carts, grave sites and anything else in their path, “This is not an assault!” was announced over the loudspeakers. Apparently unaware of the dichotomy, the tanks repeatedly smashed into the walls of the building that served as chapel, gym, dormitories, offices, cafeteria, walk-in vault & other living quarters “inserting” the gas – for hours. No one came out.

Then the building burst into flames. How? Why?

The power had been cut off by the FBI for some time. The folks inside burned lanterns for light, small heaters for warmth. It stands to reason that the tanks – or the panic inside – knocked over these items causing the fire. The FBI says otherwise. Some 70+ people died in the fire, most of them women & children. Many were found in the vault where they presumably sought shelter from the gas.

Nine Davidians escaped the blaze. One of those was David Thibodeau.

ATF and FBI accounts to the contrary, I believe the words of Thibodeau over all others. He was not seeking religion, but had a chance meeting with David Koresh at a Guitar Center in Los Angeles. Koresh needed a drummer. He ended up spending a few years with the Branch Davidians and describes Koresh as a genuine, down-to-earth kind of guy. He saw no child abuse, no over-the-top gun fetishes; he saw no signs of a mass suicide, saw no one start any fires. He was an unlikely member of the group, yet he ended up believing in Koresh. It would seem that he has no axe to grind. He only wants to set the record straight. He writes with a very personal touch and I got to feel like I know him well.

Most accounts I have seen or read place most of the blame on David Koresh and his followers. Certainly the ATF and FBI would agree. So do a few disaffected Branch Davidians who left the group before these events. If you ever get a chance, watch the video documentary, Waco: The Rules of Engagement. There – during Congressional hearings on this affair in 1995 – you will see & hear Chuck Schumer, Joe Biden and other prominent Democrats defending the actions of the ATF/FBI in no uncertain terms.

I don’t know how one justifies or defends this.

Tanks, helicopters, SWAT teams, psychological warfare, assault rifles, tear gas – Operation Showtime – bizarre. All this for one man. All this arrayed against women and small children. It is completely unjustified. Hard to comprehend that it could occur in America. Home of the free and the brave. Home of the Minute Men.

One can only wonder … why?

— If you search the Internet, you can find truly gruesome images of the FBI’s [possibly inadvertent] handiwork.

— At the time of the fire, David Koresh was dictating his explanation of the Seven Seals from the Book of Revelation [or, Apocalypse] in The Holy Bible. He was to come out, with all his followers, after its completion as per a negotiated agreement with the FBI. He had only finished the First Seal when the FBI ran out of patience. A copy, on disk, was brought out by survivor, Ruth Riddle. Again, it can be found on the Internet. One copy can be found here: David Koresh’s First Seal – Note the comments at the end regarding its veracity

—  Biblical scholar, James D. Tabor, PhD, has vouched for the sincerity of Koresh’s work. He is not alone. In fact, Steve Schneider, who was a student of theology, was Koresh’s right-hand man. In the beginning, he was a skeptic, so he invited one of his professors to debate the Seven Seals with Koresh. After that, Schneider was a devout believer.

— For any who might argue, my only reason for writing this was to point out how unnecessary this debacle was. The Davidians I have heard speak come across as calm, reasonable people. Koresh had his, shall I say, “issues” that even Thibodeau could not come to grips with, but he was completely versed in Scripture – had the Book committed to memory – and was able to captivate his audience for long hours at a time. Mount Carmel was, above all, a religious community. As one of the FBI negotiators rhetorically asked, “How do you negotiate with God?”

— I am more willing to come out when I get my message from my commander. — David Koresh

— Today, there is a simple monument marking the site.

Do catch Waco on the Paramount Network

[Hopefully, out on DVD one of these days!]

Stalling For Time : My Life as an FBI Hostage Negotiator …  Gary Noesner

The Ashes of Waco: An Investigation … Dick J. Reavis

A Journey to Waco … Clive Doyle

Waco: The Rules of Engagement

Waco: Clive Doyle: In Defense Of

My review of Thibodeaus’s book on Amazon:

5.0 out of 5 stars The Story of Waco Is NOT the Story You Thought You Knew
By Richard Federici on March 26, 2018
Format: Kindle Edition|Verified Purchase

I recall hearing about “Wacko” Waco back in 1993. More than just hearing, of course, because the televised images were disturbing, to say the least. My opinion, at the time – and almost to the present, really – based on what media reports I had seen, was that it was a tragic episode but that the occupants of the “compound” had it coming to them. Still, it was hard to make sense of tanks being used against unseen Americans.

So, I began seeking material to read, videos to watch …. because the television program deeply piqued my interest. “Waco: A Survivor’s Story,” by an unlikely participant & survivor, David Thibodeau [wonderfully portrayed by Rory Culkin in the series], has been the most fascinating find to date. The book is written in an easy-going manner that allows the reader to feel like he is being spoken to directly by Mr. Thibodeau. I came away from my reading of the book with a profoundly painful sense of mourning. The show, partly based on this book, was extremely well done, engaging and traumatic. This book is nothing less.

Now, those good folks who were so callously dispatched to a fiery death by the FBI assault – that is, those who hadn’t already been gunned down on day one of a 51 day siege by the ATF – have taken on a personal and human form. I see them now as if they were my neighbor. It’s hard to fathom that this all actually occurred. The siege at Waco, Texas has forever been etched into my being. David Thibodeau allowed me to feel his pain. Our pain, really.

A great read and a solemn reminder of just how precious our liberty is.

Images grabbed from the Internet. No copyright infringement intended. 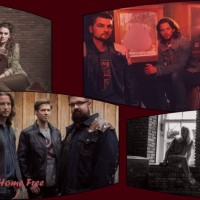 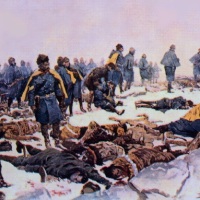 All material is the sole property of Richard Federici —

Some entries are culled from Facebook and On the Trail of the Last of the Mohicans website [assisted by Elaine Federici].